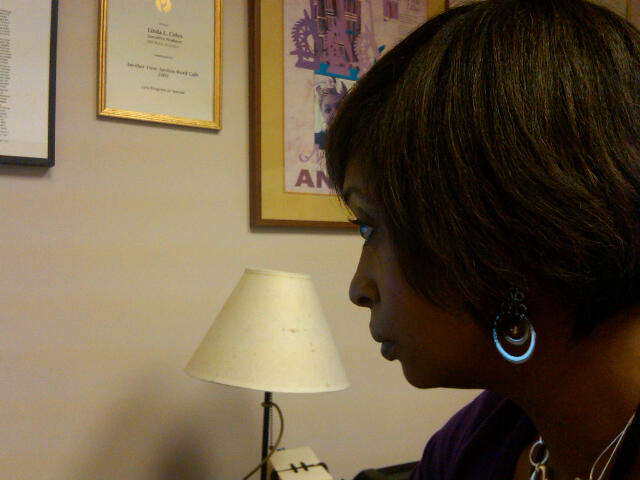 “Another View” Executive Producer Linda Coles-Kauffman is committed to producing quality programming that empowers and celebrates the African American Experience. Coles-Kauffman has more than 23 years experience in television production. For the past twelve years, she has served as “Another View” Executive Producer. In this time she has expanded the content of the series by covering issues of cultural diversity. In 2009 Coles-Kauffman added to her impressive resume the role of “Another View” host. And in 2010 began appearing on NJN News as a contributing producer /reporter.

Her work has received numerous regional Emmy nominations from the Philadelphia Chapter of the National Academy of Television Arts and Sciences, has been cited by the New Jersey Press Broadcasters Association, the Garden State Association of Black Journalists and is the recipient of the 2004, 2005 and 2006 Unity Award in Media. Coles’ award winning documentary on civil rights activist Fannie Lou Hamer was distributed nationally through PBS.
Coles-Kauffman served as a staff producer at NJN from 1985 to 1993, where she
focused on political segments, minority affairs and news packages for NJN NEWS and
“Another View”.

In 1993, she joined CBS3 in Philadelphia as a producer of the public affairs programs, Square Off, and the weekly Philadelphia Saturday Tribune. There she played a key role in the expansion of CBS3's weekend news programming. In 1997 she returned to NJN as executive producer of Another View. In her current position she has broadened the focus of “Another View” by producing programming that explores the richness and complexity of the African American experience.

A native New Jerseyan, Coles - Kauffman is a graduate of Rutgers University. She has served as an adjunct professor at Temple University in Philadelphia, PA. She is a member of the Garden State Association of Black Journalists.

In 2004 she was selected to participate in the CPB/PBS Producers academy.

This email isn't working for you.  Can you send me an update, and change it here, too?