I was recently was honored with a Los Angeles Emmy Award in the Arts, Culture/History category for "Mia, a dancer's journey." I work-shopped this film at the CPB/PBS Producer's Academy at WGBH in…

Blog Emmy Award for "Mia, a dancer's journey" 1 Like

More Congrats! Congrats to Laurens Grant for her Emmy this week for JESSE OWENS! Very exciting and totally well earned! Discussion More Congrats! 1 Like Premium LinkedIn Hi Fellow Workshoppers -  I recently participated in a 35-minute conference-call tutorial about ways LinkedIn could be beneficial to writers and journalists + I was upgraded to Premium status for on… Discussion Premium LinkedIn 1 Like Emmy for Best Topical Documentary 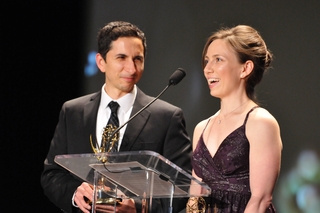 Brenda Brkusic, Presenter at the 65th Los An…

video Brenda Brkusic, Presenter at the 65th Los An… 1 Like

My latest documentary called "The Graduation Gateway" is now online at my station's website.   It is about the importance of graduating high school when trying to find a job and the efforts being…

Full Circle: The Life and Times of Edgar Whi…

video Full Circle: The Life and Times of Edgar Whi… 1 Like Songs of the Colorado

Here's an article that mentions my latest film, Songs of the Colorado.  It's screening at the LA Skins Fest Nov 19th.…